Founded in 1981 by James Wood, NLCC is one of Europe’s foremost vocal ensembles. It has given many world and British premières and, under its current musical director, Matthew Hamilton, continues to commission and promote new work. 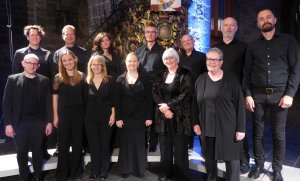 Recent work has included: Philip Glass’s Knee Plays (Einstein on the Beach) in the London Contemporary Music Festival; Prokofiev’s Ivan the Terrible (live accompaniment to Eisenstein’s film); the world premiere of John Tavener’s Flood of Beauty; Animals!, an eclectic programme including the UK premiere of Pelle Gudmundsen-Holmgreen’s Four Madrigals from the Natural World; concerts in London and Oslo with the Norwegian choir Ensemble 96; the world premiere of Iain Bell’s The Fatal Fire in the Spitalfields Festival; and Morton Feldman’s Rothko Chapel in the London Festival of American Music.

Read more about NLCC’s past performances and about forthcoming NLCC events.

‘The […] singers can pull off just about anything, as their mesmerising British première of the German composer Karlheinz Stockhausen’s Litanei 97 revealed.’
(Church Times, 2004 – première as part of Liverpool Cathedral’s centenary celebrations)

#Xenakis100 In 1989 we performed ‘Oresteia’ at QEH. Mr X was at the rehearsal. Mr Mercer and Mr Clark had rehearsed a tricky 2-tenor passage, putting our all into it. Mr X interrupted - “You’re supposed to be old men: squeakier sound!”. 33 years on, time for another shot?

#Xenakis100 has to mean something for us, right?

RIP Roger Parks. From Xenakis rocks to Denyer hooters, you were an @N_L_C_C. Our song is yours.

This website uses cookies to improve your experience while you navigate through the website. Out of these, the cookies that are categorized as necessary are stored on your browser as they are essential for the working of basic functionalities of the website. We also use third-party cookies that help us analyze and understand how you use this website. These cookies will be stored in your browser only with your consent. You also have the option to opt-out of these cookies. But opting out of some of these cookies may affect your browsing experience.
Necessary Always Enabled
Necessary cookies are absolutely essential for the website to function properly. This category only includes cookies that ensures basic functionalities and security features of the website. These cookies do not store any personal information.
Non-necessary
Any cookies that may not be particularly necessary for the website to function and is used specifically to collect user personal data via analytics, ads, other embedded contents are termed as non-necessary cookies. It is mandatory to procure user consent prior to running these cookies on your website.
SAVE & ACCEPT