For over three decades, NLCC has been one of the outstanding groups at festivals across Europe. Specialising in contemporary works, we perform uncompromisingly avant garde music of all periods and have a unique record of commissioning and premièring new works for mixed chorus.

Since April 2020, NLCC has not been able to meet or perform. However, we are still here and planning events for later in 2021. 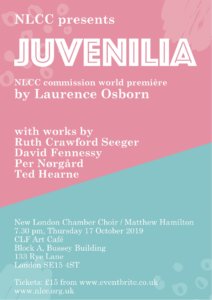 In October 2019, NLCC visited the CLF Art Café, Peckham, to present the première of Juvenilia, a new NLCC commission from Laurence Osborn. The work was coupled with other contemporary choral scores that explore communication, language, relationships, and power.

In May 2019, NLCC appeared at the Royal Festival Hall on London’s South Bank with Le Balcon and London Sinfonietta under Maxime Pascal in Stockhausen’s amazing Donnerstag Aus Licht. 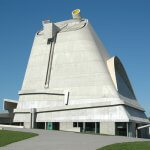 In November 2018, as guests of Festyvocal in Firminy, France, NLCC appeared at the iconic, late le Corbusier Église de S. Pierre to perform works by Xenakis, Dusapin, Messiaen, Macmillan, Harvey, and Britten, along with the world première of a new work by festival competition winner Julien le Hérisser.

We then repeated the programme at the Siobhan Davies Studios, London SE1.

CALL TO SINGERS  If you are a strong choral singer interested in joining our enthusiastic membership, please get in touch.

DONATE TO NLCC If you have ever enjoyed an NLCC concert or recording and wish to help us continue our unique mission, do please consider donating.

‘… a riveting collage of stark choral outbursts, like some long-forgotten tribal chant, set against percussion music that was all thudding beats in intricate patterns … and the New London Chamber Choir showed sensitivity as well as fierce energy.’ – Daily Telegraph

#Xenakis100 In 1989 we performed ‘Oresteia’ at QEH. Mr X was at the rehearsal. Mr Mercer and Mr Clark had rehearsed a tricky 2-tenor passage, putting our all into it. Mr X interrupted - “You’re supposed to be old men: squeakier sound!”. 33 years on, time for another shot?

#Xenakis100 has to mean something for us, right?

RIP Roger Parks. From Xenakis rocks to Denyer hooters, you were an @N_L_C_C. Our song is yours.

This website uses cookies to improve your experience while you navigate through the website. Out of these, the cookies that are categorized as necessary are stored on your browser as they are essential for the working of basic functionalities of the website. We also use third-party cookies that help us analyze and understand how you use this website. These cookies will be stored in your browser only with your consent. You also have the option to opt-out of these cookies. But opting out of some of these cookies may affect your browsing experience.
Necessary Always Enabled
Necessary cookies are absolutely essential for the website to function properly. This category only includes cookies that ensures basic functionalities and security features of the website. These cookies do not store any personal information.
Non-necessary
Any cookies that may not be particularly necessary for the website to function and is used specifically to collect user personal data via analytics, ads, other embedded contents are termed as non-necessary cookies. It is mandatory to procure user consent prior to running these cookies on your website.
SAVE & ACCEPT