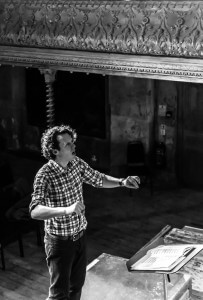 Matthew Hamilton is in demand as a conductor of choral ensembles throughout the UK. He appears frequently with groups such as BBC Singers, London Symphony Chorus, BBC Symphony Chorus and CBSO Chorus, and has worked with youth and student choirs including the National Youth Choir, HallÃ© Youth Choir, Royal College of Music Chorus, and Three Choirs Festival Youth Choir. He has recently been appointed to the choral department at London Symphony Orchestra, and is Musical Director of Reading Bach Choir, Keele Bach Choir and Salford Choral Society.

Matthew read music at Oxford, before taking a Masters degree in composition at the University of Manchester. He won a full scholarship to study choral conducting at the Royal Welsh College of Music and Drama, graduating in 2010. In addition he participated in masterclasses with some of Europeâ€™s finest professional choirs, including Berlin Radio Choir and Netherlands Chamber Choir. In 2010 he was the winner of the Bramstrup Conducting Award in Denmark.

Since making his debut with the BBC Singers in repertoire by Harrison Birtwistle and Peter Maxwell Davies for the the 2011 Proms, he has worked regularly with the Singers, directing them live on Radio 3 and for BBC TV, in concert at the Barbican, and in the recording studio. A frequent guest conductor for many of the UK’s leading symphony choruses, Matthew has prepared choirs for performances at BBC Proms and Total Immersion festivals, and for venues including Royal Festival Hall, Royal Albert Hall, Barbican, and Birmingham Symphony Hall. He has collaborated with conductors such as Charles Dutoit, Thierry Fischer, David Robertson, David Atherton, Marc Minkowski and John Wilson, and has chorus-mastered or conducted first performances by many composers, including Nico Muhly, Simon Holt and Brett Dean.

In the current season, he will prepare major works for Gergiev and Luisi with London Symphony Chorus, direct the BBC Singers in concert at St Paul’s Knightsbridge, and present a new work by Gabriel Jackson with Reading Bach Choir.

With great regret, we have decided to cancel our 2 April concert at St James's Sussex Gardens. Sorry for any inconvenience and we hope to see you at a concert of ours in the future.

@BBCSingers Saariaho Nuits/Adieux bbc.co.uk/programmes/m00… timely for this eve’s rehearsal. How should we approach the “natural singing” style she asks for in solo lines that require more than a little trained vocal technique? pic.twitter.com/ndufuJCxKJ